To mark the recent reinstallation of the Aksum Obelisk in its original location in northern Ethiopia, the UNESCO Courier revisits some of the country’s cultural sites. Our travels off the beaten path lead us to another treasure less obvious, less monumental than the castles of Gondar, less visible than the rock-hewn churches of Lalibela, but just as impressive: Ethiopia’s intangible heritage.

“Tangible cultural heritage can be a genuine instrument of reconciliation,” declared UNESCO’s Assistant Director General for Culture, Françoise Rivière, on 4 September 2008, during the inauguration ceremony of the Aksum Obelisk on its original site. The 17 centuries old stele, taken to Rome in 1937 by Mussolini’s troops and brought back to Ethiopia by the Italian government is proof of this. Standing 24 metres high and weighing 150 tons, it is the second largest stele on the Aksum World Heritage site, close to the border with Eritrea.

“This is a global first,” said Francesco Bandarin, Director of UNESCO’s World Heritage Centre. “The reinstallation of Stele No. 2, in the framework of the 1972 Convention concerning the safeguarding of natural and cultural world heritage, opens a new chapter in history,” he added. “It is a chapter that concerns not just Ethiopia but all of humanity.”

“In a certain way, this obelisk is a symbol for all of Africa,” said the Ethiopian Minister of Culture and Tourism, Mohammed Dirir, in the interview he gave the UNESCO Courier last May. He explained that by transporting the obelisk to Rome, Mussolini was taking revenge for the defeat of the Italian colonial troops in Adua (1896) in northern Ethiopia. “But we won’t live in the past,” he maintained. “It is the future we must look to. We will not forget, but we have forgiven.”

For the last two years, culture and tourism have worked hand in hand in Ethiopia. Dirir is convinced that his country, with its “millennia of history”, must take advantage of its culture “to develop responsible tourism”. When he states that cultural heritage forges the country’s international image, he is not thinking only of monuments. He is referring to customs, like the coffee ceremony, and to handicrafts, the livelihood of many Ethiopians, particularly women and young people. He stresses too the notion of “shimgalina”, meaning both dialogue and wisdom, as well as Ethiopian hospitality and its spirit of tolerance.

True, tangible and intangible heritage are inseparable, particularly in his country. This is one reason why Rivière decided to launch another “worksite”, specifically in Lalibela, the Ethiopian World Heritage site renowned for its monolithic churches carved in to the rock.

“The idea is to carry out projects integrated in world heritage sites,” she explains. “These ‘projects’ are intended to contribute to economic and human development by focusing, according to need, on cultural tourism, safeguarding intangible heritage, promoting cultural diversity, dialogue, languages or cultural industries. We will identify one site per region to launch these projects. In Africa, it will be Lalibela, where UNESCO has been present for a long time.”

The foundations for the new initiative are already there: the Organization has several conventions at its disposal, including those concerning natural and cultural heritage (1972), intangible cultural heritage (2003) and the diversity of cultural expressions (2005). “By operating in symbiosis, these instruments can transform culture into a powerful agent for development,” says Rivière. 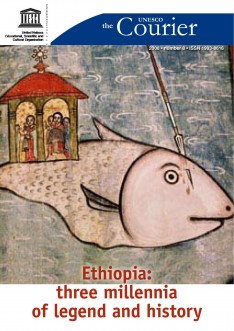