60 years of friendship with India

"November 29th was celebrated widely in India as UNESCO Day", read the JUNE 1948 edition of The UNESCO Courier. Six decades later, on 11 November, 2009, India is inviting our Organization to celebrate its National Education Day. We are proud to do so, since education goes to the heart of UNESCO's mandate. It is also a key element of India-UNESCO cooperation, as we can read in the very first articles on India to appear in this special issue of the magazine, such as 'The Gandhi Method of Education for Life' or 'The Bonds Uniting India and Unesco', which were most recently reaffirmed with the approval by the General Conference of India's generous proposal to create de Mahatma Gandhi Institute of Education for Peace and Sustainable Development as an invaluable new tool in promoting UNESCO's mission.

As the pages of this special issue show, our cooperation has covered a spectrum of other subjects ranging from tangible and intangible cultural heritage and biosphere reserve to human rights. These articles are trend-setters in their significance, as they are penned by such prestigious names as Sir Sarvepalli Radhakrishnan, Satyajit Ray, Vishwanath S. Naravane, Amartya Sen, Rajendra Pachauri, Sundara Ramaswamy, and Romila Thapar, to mention just a fiew.

Although sixty years of close collaboration cannot be summarized in sixty pages, this special issue of The UNESCO Courier aims to present a glimpee of India's presence over the years in the magazine. 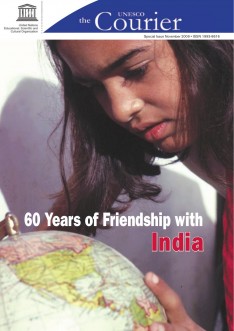