Of all the specialized agencies of the United Nations, none is more essentially concerned than UNESCO with the maintenance and development of human rights. The very terms of UNESCO's Constitution impose on the Organization the duty or fighting against the agents of discord and war through education, science and culture and modern means of communication. The Organization's final aim is to help maintain peace and human happiness. Now what can threaten human rights more directly than war and warlike tendencies? Or, on the other hand, what can be a stronger force for peace than the unhampered development of every nation and every man? The maintenance or peace and the advancement of human happiness are therefore two tasks indissolubly linked, always to be considered together; they are in fact two aspects of the same ideal ‒ the attainment of human rights.

It was this idea which, on the proposal of the Commission on Human Rights, brought forth the Economic and Social Council's recommendation that UNESCO should co-operate in its work for the promotion of justice and peace. The chief ways in which UNESCO can further the work of the Economic and Social Council are: the working out by expert committees of educational programmes, pilot projects and seminars, and the dissemination of the results of scientific enquiries proving the falsity and monstrosity of racial theories and the dogma of inequality. UNESCO's work is an excellent complement to that of the United Nations. The latter is more concerned with immediate efficacy whilst the former is working for the progressive building up of a better world in tune with the actual march of history.

With this in mind, UNESCO has included in its programme, since the first months of its existence, a philosophic enquiry regarding the bases of human rights. Since the classic declaration of the 18th century was issued the material and political conditions of human life have been fundamentally transformed, philosophical concepts and political ideologies have also completely changed. But no attempt has so for been made to reach agreement on the basic human rights by seeking the opinion of the most enlightened citizens of all countries. What are the prospects for man in society ? What dangers jeopardize the attainment of his most elementary rights? What part should be played by society and the State? What relationship exists between the old acknowledged rights, which were chiefly civil and political, and the newly claimed rights, which are economic and social ? How do the right to education, cultural rights, the right to free expression of thought and the right to adequate information fit in with the other rights? And, to go deeper, what is individual man, what is his place in his own particular community and in the world community. Such are the essential questions which arise and they can well be described as philosophic questions.

UNESCO wished to consult the most enlightened minds in all countries on these vital problems. More than 250 outstanding persons, including not only philosophers and moralists but also artists, scientists, sociologists and men of action, were invited to send replies to these questions to the Secretariat. The National Commissions for UNESCO have been associated in this extensive undertaking. On the basis of some seventy replies received from widely differing areas of the world, a Committee of Experts, including representatives of the chief philosophic tendencies, and more especially of political philosophy, has drawn up positive conclusions. Read more.

Other main articles in this issue

Discover a selection of our issues on Human Rights here 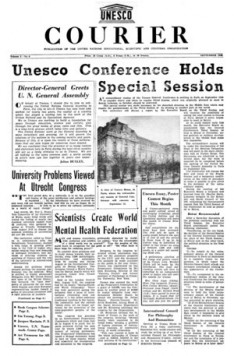