Afghanistan: a nation at the crossroads

One year and one day after September 11, 2001, President George W. Bush announced before the General Assembly of the United Nations that the United States would return to UNESCO after an absence of 18 years. A founding member of the Organization in 1945, the United States played a key role in helping to define its mission: the promotion of human rights, of the free flow of ideas and of information, of scientific and cultural cooperation, and of educational opportunities for all. None of these pursuits is less urgent today than was the case half a century ago. But none either is more important in the current international climate than UNESCO’s overriding ambition: to mobilize States, but also academic and scientific institutions, schools, libraries, museums, enterprises and ordinary citizens in all walks of life who feel they share a common responsibility in laying the ground for a genuine and sustained dialogue between cultures.

A few weeks after 9/11, the General Conference of UNESCO – the first international gathering at ministerial level since that fateful day – unanimously adopted a Universal Declaration on Cultural Diversity. Calling cultural diversity one of the roots of development, “as necessary for humankind as biodiversity is for nature”, the Declaration affirms “that respect for the diversity of cultures, tolerance, dialogue and cooperation, in a climate of mutual trust and understanding are among the best guarantees of international peace and security”. Adopting this ground-breaking text, the 188 member-States of UNESCO rejected the theory of the inevitable clash of civilizations and forcefully condemned all forms of fundamentalism.

Afghanistan – subject of the Focus section in this, the first full-fledged issue of the new Courier – is a land where war and the cult of ignorance, of segregation and of violence have brought ruin, despair and, today, a breath-taking task of reconstruction. It would be worthy of interest and active compassion for those reasons alone, but there is more. Afghanistan once was, and for centuries, the site of a most extraordinary fusion of cultures, perhaps without parallel in history. What little has survived gives special poignancy to the concept of “common heritage of humanity”. 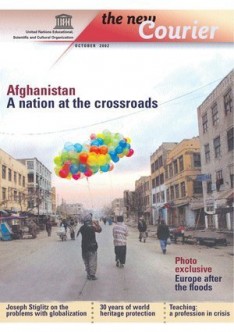