After being for so long a Utopian dream, has disarmament now become a practical proposition?

We remember how, some fifteen years ago, UNESCO invited Nobel Peace Prize winner Lord Noel-Baker to a symposium at which one of his fellow-participants was another Nobel Peace laureate, Sean MacBride. By then over eighty, his eyesight failing, Lord Noel-Baker spoke without notes. His voice was clear, his turns of phrase elegant, his reasoning firm, consistent and irrefutable. He took his listeners back to the time of David Lloyd George, whom he had known well and to whom, in the aftermath of the First World War, he had already pressed the case for transferring the massive resources invested in arms research and production to education, health and other forms of welfare. Of course, such reasoning became even more relevant and urgent after the Second World War, when East and West spent colossal amounts of money to keep up with each other in the arms race.

What was so moving about Lord Noel-Baker's speech that we still remember it vividly many years later? Perhaps it was the contrast between the physical signs of the orator's age and the subtlety, eloquence and undimmed intellectual fire with which he spoke. Perhaps too it was the gap, which suddenly seemed intolerable, between the dream of a world without weapons and the absurd reality of an accelerating, seemingly unending arms race.

Today the bipolar world is a thing of the past, and the balance of terror can no longer serve as a pretext for a gadarene rush to the brink of the abyss. Does this mean that humanity will start to prefer negotiation to war? Can we expect to see nations making or buying fewer bombers and building more schools and hospitals?

In exploring some aspects of this question, the present issue of the UNESCO Courier reveals at the outset its complexity and its paradoxes. While many moral, political and socio-economic arguments now plead in favour of a "disarmament race", the context of the post-Cold War period is also bringing to light contradictions, constraints and habits that will not vanish overnight just because America and Russia are no longer clashing on the ideological battlefield.

New ideas about disarmament are starting to take shape, but at the same time new trends toward rearmament are emerging. From the following pages it can be seen that this contradictory two-way movement reflects a much older conflict between a mentality based on distrust, fear and the cult of strength rather than the culture of law and a revolutionary state of mind that looks forward to the challenge of a peaceful future in which freedom and justice will be possible for all. 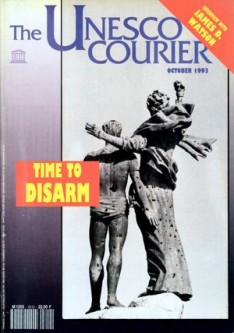