The Rights of man

The "Universal Declaration of Human Rights" adopted by the General Assembly of the United Nations, meeting in Paris, on 10 December, 1948, was the fourth historic Act of its kind, proclaimed by a free Assembly or reluctantly accepted by a reigning sovereign, within a period of seven and a quarter centuries."Magna Carta" was signed by King Henry III of England in 1225 A. D. Nearly 600 years later the "Bill of Rights" embodied in the Constitution of the United States of America, and the "Declaration of the Rights of Man" was incorporated in that of the French Republic. Now, after a second World War in which the flame of human liberty came perilously near to extinction, the age-old refusal of enlightened peoples to submit to tyranny finds expression in a new Declaration, signed and proclaimed this time not by a monarch, a group of citizens or a national assembly, but by the representatives of 58 nations, united in defence of democracy.

In spite of the lapse of centuries, the fundamental principles underlying these successive charters of human freedom have not changed. The very similarity of their language proves how constant is the need for vigilance if the rights of the individual are to be preserved. The complexity of this ancient problem in modern times may be gathered from the symposium on Human Rights prepared by Unesco this year. Let us quote some passages :

"Personal liberty can be made secure only by abolishing the abuse of power altogether. Unesco is engaged at present in facilitating the task of mitigation; but it is in the fortunate position of being able to proceed, if it so desires, to the imcomparably more important task of prevention, of the radical removal of present impediments to liberty. This is primarily an affair for the scientistic section of the Organization"

"It is vital for the future of the world that intense animosities and hotreds be allayed. this cannot be done solely by social and psychological studies...The immediate objective of the scientist should be to ensure that all branches of society in all nations are freed from economic anxiety."

Lastly, an opinion from Unesco House itself: " From the moment that information come to be regarded as one of the rights of man, the structures and practices which make of it an instrument for the explanation, by alienation, of the minds of the masses, for money or for power, can no longer be tolerated"

Science, Education, Information -each of the experts has his own point of view, but all of them, in effect, give the same warning to mankind. The Rights of Man must be defended collectively, with every weapon in the armoury of peace. "Freedom of speech, freedom of religion, freedom from want, freedom from fear - and, let us add, freedom from ignorance - these are the conditions of emancipation.

"When we enumerate man's rights, we are also enumerating duties to be accomplished. None touches upsmore nearly than the right to education".Only when these separate freedoms are truly guaranteed can the world hope to see the dawn of a universal Freedom born of tolerance, justice and goodwill towards men.

Discover other issues on Human Rights in the Courier. 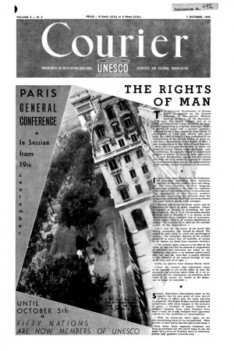