On November 16, 1945, the Constitution of the Organization was signed and sealed to give expression to the international community’s hopes for a world of solidarity and dignity following the “great and terrible war” to which it had just put an end.

And just as our forerunners denounced at the root of that war “the denial of the democratic principles of the dignity, quality and mutual respect of men”, so we must be alert, for the future, to the threats looming over those principles and that dignity. Horror always arrives suddenly, in the form we least expect. Twelve years before 1945, nobody could have imagined that the “final solution” would be conceived and put into practice. We must derive from that example of historic blindness the resolve never to relax our vigilance and the desire to forestall any lessening of respect for human dignity.

Following the end of the Second World War, as the world assessed the extent of the crimes and disasters caused by oblivion, contempt and assaults on human dignity, UNESCO was created to avert the recurrence of such a tragedy and to build the foundation for “the intellectual and moral solidarity” of humanity.

Today, as the 21st century begins, the intrinsic value of UNESCO’s mandate appears in its full power. More than ever, it is in the minds of men that the defences of peace must be built. This means affirming dignity in and through diversity.

To celebrate its 60th anniversary, UNESCO has chosen to highlight the coherence and intelligibility of its long existence. Besides celebrating the date of its creation on November 16, we have also decided to evoke, over the course of 60 weeks, the activities developed over 60 years, with results obtained, projects launched and the new challenges we are now facing.

In that spirit, this special issue of the new Courier celebrates the 60th anniversary by presenting reports on ten key subjects. Each puts into perspective UNESCO’s action and illustrates with a few concrete examples how much progress has been made and which questions are still pending. The themes resonate with global news and demonstrate the relevance of the issues that concern UNESCO. The close ties between the latest events, the major issues of our time and UNESCO’s activities – often less than spectacular – best reveal the instrument of international cooperation that was intended by its founders and emphasize how essential it is today.

Finally, this issue is also special because it marks a turning point in the 50-year history of the Courier. It opens a door to another way of sharing its articles with the greatest number of readers, and contributes to UNESCO’s presence on the internet. The 60 themes of this 60th anniversary will be presented on the website as a certain number of reports that fi nd their continuation in the thousands of pages that are on line. In 2006, the electronic version will prevail.

My wish, therefore, is that as you read the reports in the new Courier and take the time to reflect today on human dignity, you will contribute to bringing about, in the face of what Hannah Arendt called “the banality of evil”, the emergence of new forms of analysis and reflection to help us find the path to solidarity.

Koichiro Matsuura, Director-General of the UNESCO 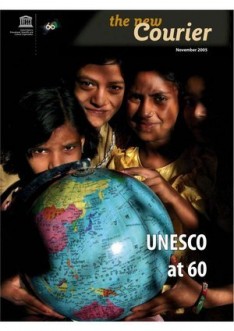