War on war: the poet's cry

Unesco 's Paris headquarters will become for a day an international forum from which a score of poets from every corner of the globe will speak out through their poems against the neverresting forces of oppression and destruction, aplatformfrom which the mingled voices of peace, poetry and liberty can declare "War on War".

To our great regret, limitations of space and time preclude publication of works by all those taking part in this symposium. Nevertheless, in the works of twelve of the participating poets presented in this issue ofthe Unesco Courier, some hitherto unpublished, despite differences of tone, emphasis and cultural background, and despite the clouding veiloftranslation, the anguished, universal voice of the poet can be heard, denouncing war and pleading for fraternity and peace.

The centenaries of three other poets are also honoured in this issue those of Subramania Bharati, the great Tamil writer who foughtforbutdidnot live to see his country's independence, and Yànka Kupala and Yakub Kolas, both also sturdy fighters for freedom and democracy who have earned the title of "fathers" of Byelorussian literature.

Nor could the Unesco Courier allow theyear 1982 to elapse without marking the anniversaries of two other greatfigures St. Francis of Assisi whose 800-year-old message, as the Italian writer Carlo Bopoints out, is still applicable today, and the Polish composer Karol Szymanowski whose music is now being accorded the renewed recognition it deserves.

Finally, we pay all too brief tribute to the memory ofthe Cuban painter Wifredo Lam, who died in September this year, and whose works exude the electrifying creative forcegenerated by the encounterof different cultures

Discover poems by Adonis, Ai Qing, Breyten Breytenbach, Ernesto Cardenal, Jayne Cortez, Jean-Pierre Faye, Allen Ginsberg, Sony Labou Tan'si, Thiago de Mello, Amrita Pritam, Kazuko Shiraishi and Andrei Voznesenski, among others. They all responded "present" to UNESCO’s appeal to declare together "War on War", and "to set the ethic of philosophy against military aggression, whatever its source and whatever its pretext."

Learn more in this issue of the UNESCO Courier. Download the PDF.

Discover other issues and articles on Poetry in the UNESCO Courier. 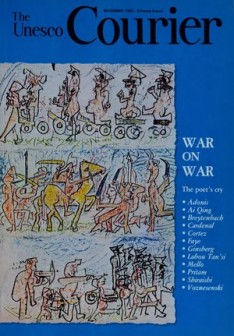