Demand for water has never been greater, due to such factors as population growth, changes in food consumption and increased energy production. These are among the conclusions of the latest United Nations World Water Development Report, an assessment of water resources, entitled ‘Water in a changing world’. It highlights the importance of water in development and economic growth.

Demand is increasing, and some countries are already reaching the limits of their water resources. The effects of climate change are likely to aggravate this situation even further. Competition for water is intensifying – whether between countries, urban and rural areas, or different sectors of activity. This may make water an increasingly politicized issue.

Access to basic water-related services remains inadequate in much of the developing world. The link between poverty and water resources is obvious: the number of people living on less than US$1.25 a day coincides approximately with the number of those without access to safe drinking water.

This situation has a major impact on health. Almost 80% of diseases in developing countries are associated with water, causing some three million early deaths. For example, 5,000 children die every day from diarrhoea, or one every 17 seconds. In all, about one tenth of all illnesses worldwide could be avoided by improving water supply, sanitation, hygiene and management of water resources.

While part of the population still lacks adequate access to water, demand has never been greater. Freshwater withdrawals have tripled over the last 50 years, while the area under irrigation doubled during the same period. This phenomenon is particularly linked to population growth. The world’s population, currently estimated at 6.6 billion, is growing by about 80 million people each year. This means demand for freshwater is increasing by 64 billion cubic metres a year.

There have been changes in lifestyles and eating habits in recent years, in particular an increase in the share of meat and dairy products consumed in emerging countries. The production of a kilo of wheat requires 800 to 4000 litres of water, while a kilo of beef, takes 2,000 to 16,000 litres.

Water shortage linked to climate change can also be expected. Experts say that by 2030, 47% of world population will be living in areas of high water stress. Water scarcity in some arid and semi-arid regions will have major impacts on migration. From 24 to 700 million people are expected to be displaced because of a scarcity of water.

Obviously water is one of the key issues the world, and particularly developing countries, has to face. Yet an inadequate percentage of budget allocation by governments and in official aid goes to water. For example, overseas development assistance to the total water sector has been decreasing and remains at only about 5% of total aid flow.

At the same time, corruption in the water sector may add to the overall cost of these investments: typical examples include falsified meter readings, favouritism in public equipment purchases, and nepotism in the allocation of public contracts. Estimates indicate that 30% of budgets can be siphoned off in some countries. These practices are rarely curbed, despite initiatives by some countries, like South Africa.

Confronted with shortages, some countries have already begun to integrate their strategies for managing water resources with their development plans. Urban wastewater use remains limited for agricultural purposes, except in certain countries: 40% of uses in the Gaza Strip (Palestinian Territories), 15% in Israel and 16% in Egypt.

Desalination of sea water is another process used in arid regions. It is used to obtain drinking water and for industrial use in countries that have reached the limits of their renewable water resources (e.g. Saudi Arabia, Israel, Cyprus).

Australia has also changed its policies, with a range of new measures. Restrictions have been introduced — on watering gardens, washing cars, filling swimming pools, etc — in the country’s major cities. In Sydney, a dual water supply was introduced in 2008 — one for drinking water, another for other uses, which draws on recycled water.

This issue of the Courier includes a series of articles illustrating the main points of the latest World Water Development Report, “Water in a changing world”.

Read also our Focus feature on line: Saving our nearest relatives, the gorillas 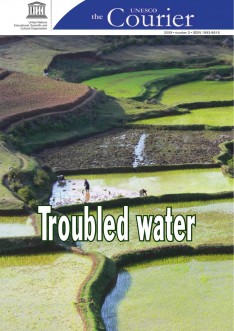