Children of the imagination

The World Congress on Books, the first international, interdisciplinary gathering ofbook specialists on a worldwide scale to be convened by Unesco, is to be held in Londonfrom 7 to 11 June 1982.

To coincide with this major event, this issue of the Unesco Courier is devoted to literature for children. Despite the many obstacles to its spread in the developing world (illiteracy being the most serious), children 's literature is more and more becoming part of the common heritage of the young and serving as a link between cultures and peoples.

Literature conceived specificallyfor the young andfeaturing youthful heroes and heroines, only really developed in the western world during the nineteenth century. Today, the production of children's books represents a rapidly expanding sector of the publishing industry. Although some critics have seen this expansion as being motivated by the desire for profits as much as by any educative spirit, in both the industrialized and the developing world it has some remarkable achievements to its credit.

Nevertheless, the desire and need to spin talesforyoung people, both for their entertainment and as a means ofpassing on to them the collective wisdom of the group, are certainly as old as mankind's earliest cultural experiences. Thus, rather than attempt to determine the limits, whether historical or ofform, of a literary genre so difficult to define that certain writers, like Michel Tournier, deny that any such limits exist, seeing in it the quintessence of all literature, in this issue of the Unesco Courier we have chosen to give a panoramic, though not an exhaustive, picture of the heroes and heroines of children's literature. It is no accident that, almost everywhere, the earliest major works written for children have drawn their inspiration from the oral tradition and, above all, from tales with an initiatory content, whetherfor children or adults, as witness the central place held by such tales in the African social life and ethic.

Clearly, we cannot restrict ourselves to the adolescent or child hero, to Pinocchio, Alice, Little Ivan or Huckleberry Finn. Over the years young readers have claimedfor themselves tales from a wider literature or legendary figures not primarily intendedfor them, but who are imbued with a mixture of liberating power and inspiredfantasy.

Among these must be counted Goha the Wise Fool and, in another vein, Sandokan the Malay pirate and a host of other characters who belong to literature for everyone. In dominated societies, the young reader identifies himself more readily with the adventurer and the upholder of justice who fights against tyranny and all forms of oppression, the revolutionary model whom he usually finds in adult literature. In some types of "oral literature", however, particularly in Africa, the omnipresent child hero is raised to the status of a symbol. He embodies the spirit ofgood or the forces ofevil and is seen not as an individual but as "The Child", an anonymous, superior embodiment of the hopes andfears of the social group.

Another hero figure who must not be forgotten here is the prestigious animal intermediary or intercessor, such as that great favourite with Chinese children the Monkey King Sun Wukong. Finally, mention must be made of the strip cartoon hero. Although the strip cartoon still too often remains a mediocre consumer product purveying a suspect ideology, it has become a means of com¬ munication of worldwide importance which, whether we like it or not, contributes equally with literature to the "inner growth " of the child.

Discover more issues on books in the UNESCO Courier. 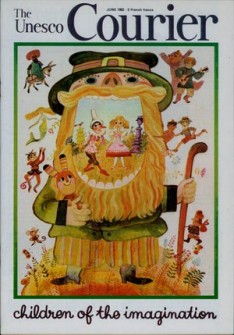