The interactive digital version of the Atlas of the World’s Languages in Danger provides updated data about approximately 2,500 endangered languages around the world and can be continually supplemented, corrected and updated, thanks to contributions from its users.

Some of the data are especially worrying: out of the approximately 6,000 existing languages in the world, more than 200 have become extinct during the last three generations, 538 are critically endangered, 502 severely endangered, 632 definitely endangered and 607 unsafe.

For example, the Atlas states that 199 languages have fewer than ten speakers and 178 others have 10 to 50. Among the languages that have recently become extinct, it mentions Manx (Isle of Man), which died out in 1974 when Ned Maddrell fell forever silent, Aasax (Tanzania), which disappeared in 1976, Ubykh (Turkey) in 1992 with the demise of Tevfik Esenç, and Eyak (Alaska, United States of America), in 2008 with the death of Marie Smith Jones.

As UNESCO Director-General Koïchiro Matsuura stressed, “The death of a language leads to the disappearance of many forms of intangible cultural heritage, especially the invaluable heritage of traditions and oral expressions of the community that spoke it – from poems and legends to proverbs and jokes. The loss of languages is also detrimental to humanity’s grasp of biodiversity, as they transmit much knowledge about the nature and the universe.”

The work carried out by the more than 30 linguists who worked together on the Atlas, financed by Norway, shows that the phenomenon of disappearing languages appears in every region and in very variable economic conditions. In Sub-Saharan Africa, where approximately 2,000 languages are spoken (nearly one third of the world total), it is very probable that at least 10 % of them will disappear in the next hundred years. The Atlas furthermore establishes that India, the United States, Brazil, Indonesia and Mexico, countries that have great linguistic diversity, are also those which have the greatest number of endangered languages. However, the situation is not universally alarming. Thus, Papua New Guinea, the country which has the greatest linguistic diversity on the planet (more than 800 languages are believed to be spoken there), also has relatively few endangered languages (88). Certain languages that are shown as extinct in the Atlas are being actively revitalized, like Cornish (Cornwall) and Sîshëë (New Caledonia), and it is possible that they will become living languages again.

Furthermore, thanks to favourable linguistic policies, there has been an increase in the number of speakers of several indigenous languages. It is the case for Central Aymara and Quechua in Peru, Maori in New Zealand, Guarani in Paraguay and several languages in Canada, the United States and Mexico.

The Atlas also shows that due to economic factors, different linguistic policies and sociological phenomena, a given language may have varying degrees of vitality in different countries.

For Christopher Moseley, an Australian linguist and editor-in-chief of the Atlas, “It would be naïve and oversimplifying to say that the big ex-colonial languages, English, or French or Spanish, are the killers, and all smaller languages are the victims. It is not like that; there is a subtle interplay of forces, and this Atlas will help ordinary people to understand those forces better.” 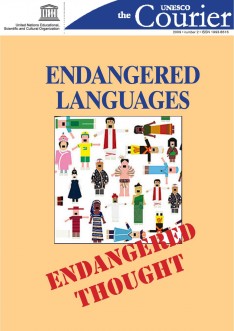