25 years of Unesco viewed by a student of 25

On November 4. 1971, UNESCO will be twenty-five years old.
To those who have served UNESCO throughout this quarter of a century, giving unstintingty of themselves and being rewarded a hundredfold by the exhilaration that cornes from dedication to man in all his universality, this anniversary provides a wealth of material for reminiscence and reftection concerning the past.

But it is to the future that I look. The future is the true dimension of UNESCO which has as its mission to usher in a new spirit and which draws its whole strength from the hope inhérent in its purpose. My thoughts turn to those who were not yet born when UNESCO was created, the young people who are the future of the world and who
make up more than half its population.

It was fitting to ask a young person, who had played no direct part in the history of UNESCO, to tell the story of our first twenty-five years, as he himself saw them with the clear, fresh eye of youth. Those of us who have lived this history have lived it chiefly for the young people of his generation, ever since that "great and terrible war" when everything was so nearly lost, up until today when our efforts - with all their shortcomings - are under the sweeping scrutiny of tomorrow's générations. And it is precisely on them that UNESCO's tomorrow depends. Even if they may misjudge certain aspects of our activities or some of our intentions can we fait to ask youth about their attitudes towards our work and whether or not it cornes up to their expectation ?

In the past twenty-five years UNESCO has had to face situations and tasks that its founders had never foreseen such as the cold war of the Fifties and aid for development in the Sixties. UNESCO thereby has demonstrated a capacity for adaptation and invention which testifies to its vitatity, and at the same time it has shown a remarkabte insight into present-day realities and their probable aftermath.

These qualities will be especially needed in the immediate years ahead which, I feel sure, will see the opening up of a new era. Here I am not referring to political events, to modifications in relations between States - although some very important changes are already ernerging on the horizon ; I am thinking of those more profound transformations that are now taking place in the thinking and actions of men which are bringing into question the very meaning of life and the order of society.

Almost everywhere, especially amongst the younger age groups, it seems to be increasingly felt that the quality of life of the individual is the only real justification for the efforts made to promote growth and prosperity in a community. It is clear that the quality of life sought by many persons - including those who choose withdrawal from society or the path of revolt - calls for a re-examination of currentty accepted values. Development is coming less and less to be equated with growth pure and simple. Growth for what ? is the often heard question.

We can therefore be quite sure that education, science, culture and communications, that is, learning and training, research and the creativity of the mind which enable man to exptain his existence and give purpose to life, will be matters of the utmost concern for governments and citizens alike in the quarter of a century to come. This is atready the case with education. What has been called the crisis in education, or more properly, the need for the total regeneration of education, is clearly evident in different forms and to varying degrees all over the world. For some, this "crisis" is merely a symptom heralding the approach of a vast cultural revolution.

Faced with such great changes, the focus of which is still unclear, it is not unfitting that UNESCO in its youth should be entrusted to the youth of the world. Their destinies are inséparable.

Discover other issues on youth in the Courier. 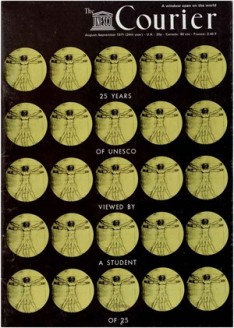