The Spell of sport

UNESCO’s approach to sport is summed up in its 1978 International Charter of Physical Education and Sport. These activities, the Charter says ,“should seek to promote closer communion between peoples and between individuals,together with disinterested emulation, solidarity and fraternity, mutual respect and understanding, and full respect for the integrity and dignity of human beings.

”The promotion of ethical values — especially to combat marginalization and violence — is central to this approach. It stresses the necessity for sport to be open to everyone, starting with young people who are all too often sidelined because they are physically or mentally disabled, because they live in problem areas or just because they are female.

UNESCO’s focus is on promoting sport for all. It believes that in a society in which people need to be equipped for lifelong learning, sport can make a vital contribution to education. For education involves much more than spoon-feeding information . Its ultimate purpose is to stimulate people’s capacity to think,create and interact with others and to use this capacity in order to be self-reliant, while also helping others to improve their well-being and quality of life. Sport is an incomparable way of achieving these aims.

We live in a world where the gap between rich and poor keeps on growing. On the sports field, or failing that, in streets, courtyards, or fields ,such differences disappear like magic. People compete against each other, but they also get together in teams, using weapons that are for once entirely peaceful: speed, strength, skill, endurance and intelligence — qualities that have nothing to do with social status.

We live in a violent world.In cities, where two-thirds of humanity will soon be living, even young children go out onto the sports field bursting with the aggression they have accumulated in their daily lives. And here too, a kind of miracle takes place and the aggression is transformed. Its negative and destructive charge is transmuted into a positive desire to beat one’s opponent — not to achieve victory at all costs and by any means, but fairly, in a contest governed by rules that both sides observe.In these conditions sport becomes a school where people can give vent to their aggressive instincts and at the same time learn tolerance and respect for others.Those who practice sport become aware of forces which, if they are not curbed,might blindly take over their lives.

We live in a world of worsening national, ethnic and religious antagonisms.The capacity of sport to unite people — almost to weld them together — is obvious these days. It culminates in the Olympic Games and the soccer World Cup, which have given the world so many ennobling images of comradeship. Our pleasure is all the greater because it is shared on an unprecedented scale. No other modern social event makes people feel so strongly that they belong to a global village.

But unfortunately there is more to sport than this. Sport is not monolithic: it takes many forms, and is riven by differences and disagreements.When sport hits the headlines it does not always glorify the heroes who have won our admiration by their performances on the field. Behind the scenes, but increasingly in the spotlight,is a world of wheeling and dealing, drug-taking, and athletes who are subject to premature specialization and intolerable stress. Barbaric chauvinism takes over when public opinion and the enthusiasm of supporters are fired up to fever pitch.

In poor countries, four out five young people still have no access to adequate sports facilities and training.The stakes are so high in big sporting events that only the results count: the purpose of sport goes by the board.The designation of winners and losers is more important than bringing together athletes to compete under a set of rules.This is a far cry from the “happiness” evoked by the French poet Paul Verlaine — the happiness of “peace without victory”.

Federico Mayor, Director-General of the UNESCO 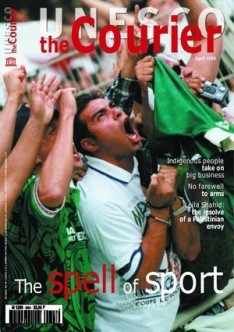